It’s been a busy fall at Digital Den, and here are some of the highlights…

The development studio has finally come together and is now all setup and working.

We are currently in the preliminary phases of defining our first fun “demo” in Unity for the Rift, and work on that will get underway in the coming months.

There has been a lot happening on the VR scene in general and especially locally.

The Boston VR Meetup hosted a visit by Jaunt VR at Hack/Reduce on October 15th.

See the state of the art cinematic VR technology from this month’s featured guest, JauntVR! Their camera system simultaneously records 3D stereoscopic video in all directions and has a unique design that can be flexibly configured. Coupled with their 3D sound-field microphones, they capture everything needed to reconstruct the complete visual and a…

They demonstrated their new 360 video technology and showed demons on the Rift.
Other members of the Meetup also showed off their newest work too.

Then the Boston Unity Group hosted Ray Brierly at the MIT Stata Center.

Sensory Input – Making Games That Can See, Hear and Feel

Sensory Input – Making Games That Can See, Hear and FeelMost of the input we deal with as game developers comes from the keyboard, mouse, and gamepad, but there are more ways we can interact with our gaming devices. Join Ray Brierly as he shows off some of the more unconventional ways to get player input in Unity, including the following:• Motio…

His entertaining and informative presentation, Sensory Input – Making Games That Can See, Hear and Feel, explored some of the more unconventional ways to get input into Unity (e.g. Motion controls, camera and audio input). His fun demo of a Twitter feed “3D blocks” visualization was definitely a major hit! 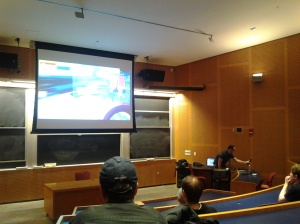 Finally, just today, October 28th, Condition One officially launched their first VR documentary for the Rift entitled Zero Point, and it looks like it could be a real game changer. You can read a Mashable story about the release here. If you have a Rift, this is a definite “must see!” Check it out on Steam here!

So, it’s been a busy and exciting October, and November is shaping up to be even better!